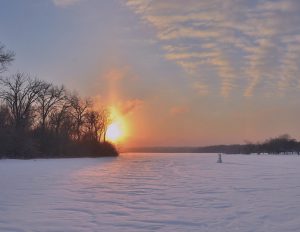 Winter is a season associated with distinct feelings for all of your senses. There’s the smell of pine, the taste of apple pie, the sighting of the fist snowflake, and the crunch of rock salt beneath your boots. While we often give little thought to the last one, it’s certainly something we’re all familiar with.

Have you ever stopped to wonder what happens to all that salt after the snow melts away and we trade out our boots for flip-flops?  In 2009, the University of Minnesota did ask that question, and the results were concerning. They reported that approximately 70% of the salt used to de-ice streets and sidewalks stayed in the watershed long after the snow vanished and flowers blossomed.

The salt dissolves in the snowmelt. Some ends up in nearby soil, but most of it goes right into the local streams and ponds.  It can also end up in wells of drinking water. Salt water is denser than fresh water, so when it gets to a pond/lake/drinking well, it sinks to the bottom and doesn’t flow out easily. Of course, everyone knows that excess salt in the water is unhealthy for humans and pets; it’s why we can’t drink sea water. But people often don’t realize that seemingly small changes in salt levels in the lakes shift the water chemistry enough that many fish and plants die.

Luckily, the technology exists to help us cut our salt usage in the winter significantly. Last year, Friends of Lake Wingra received a grant from Madison Metropolitan Sewage District and Madison City Engineering to study some of the best practices for managing winter salt application. It turns out that the places that use the most salt are actually commercial parking lots and sidewalks. De-icing salt is often applied at 5 -6 times the recommended rate. So, in conjunction with a plowing company and some experts, we trained local staff with new technology to cut back on the use of rock salt. Then we started monitoring.

We carefully kept track of snow events in 4 different parking lots between February and March. Our plowing team pre-treated the asphalt with a brine (a carefully calculated saltwater mixture). The brine is designed to stop the snow and ice from sticking to the surface of the parking lot. It doesn’t actually prevent the snow from accumulating, it just makes it easy to remove.

The plowing team used new technology to make sure that they used just enough brine to stop the ice but didn’t overspray. After each snow they filled out a brief report. At the end of the study, the consensus was that the brine made snow removal became significantly easier. They only needed to use rock salt in places where they had not pretreated the parking lot and so the snow had gotten compacted with travel. Using the same techniques, the Village of Shorewood hills reported a 30% reduction in their salt usage.

This represents an important opportunity for us to cut down on the amount of salt in our lakes! Not only that, but it could save companies a lot of money on rock salt in the winter. The Monona Grove School District plans to track these savings and use them to upgrade their equipment in the future.

Friends of Lake Wingra intends to continue the study this winter so that we can fine tune the best way keep people safe and keep our lake fresh!