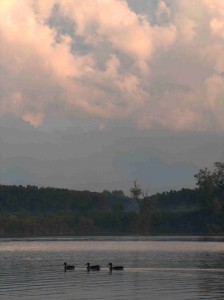 Lake Wingra is a spectacular urban lake near the center of Madison, Wisconsin. Its waters provide exceptional recreation, its shoreline is mostly protected by public ownership, and the surrounding areas contain beautiful, natural areas tucked within an otherwise urbanized environment.

Yet, Lake Wingra is hardly pristine. The lake and its watershed have been considerably affected by urbanization. Sediments, excessive nutrients, road salt, and many other pollutants are carried to the lake from our streets & buildings, and even our lawns, parks and other green spaces. Vilas Beach, the most heavily used beach in Madison, sometimes needs to be closed due to potentially unsafe bacterial conditions.

Invasions of aggressive, non-native species into the lake and watershed have reduced the health of native plant and animal communities. Dredging, filling, damming, groundwater pumping, storm sewer construction, and other practices have destroyed former wetlands and natural springs, reduced water clarity, affected water flow, and even dramatically changed the size of the lake itself.

Lake Wingra can be protected, and even improved. But this requires an active watershed community that understands and is concerned about the lake and its watershed.

What is a watershed?

A watershed is all the land around a body of water where – after a storm – the rain water runs down into that body of water. Think of a bathtub. When you turn on the shower, water that lands on the curtain or sides will eventually end up going down the drain. So, those areas are in the ‘bathtub watershed.’ Any water that splashes outside of those areas will not end up in the drain, so they are in a different watershed.

Why do watersheds matter?

Watersheds matter because pollution in one area can be carried to all of the other areas by the water. Plants, animals, and of course people depend on clean water, so it is helpful to visualize a watershed as a biological community instead of a complicated hydrological system! And, small watersheds are part of larger watersheds, so everything is very connected. For example, we may live in the Wingra Watershed, but this water will eventually end up in the Mississippi River, so it’s also part of the Mississippi Watershed. What we do to our water could impact people all the way in Louisiana!

How clean is the water?

There are many factors that determine how clean the lake is:

Algae are a natural part of lake ecosystems, but when their growth becomes excessive, they contribute to poor water quality. Plant nutrients, primarily phosphorus, mostly determine the concentrations of algae in a lake. Phosphorus comes from fertilizers and decomposing plant material in the watershed, and is transported to the lake by stormwater runoff.

Sediment causes water to appear muddy or cloudy and can smother aquatic plants and make the lake shallower. Sediment comes from soil erosion in the watershed, primarily at construction sites, and from sand applied to streets in winter. The amount of sediment and algae together determine water clarity. Lake Wingra’s water clarity, as measured by a Secchi disk, averages 2.5 feet, which is slightly below the average of similar lakes in Wisconsin.

Salt used in winter on roads and sidewalks can cause high chloride levels that are toxic to sensitive aquatic life. Lake Wingra’s chloride concentration has increased from 5 mg/L before the use of road salt to 100 mg/L today.

Toxic chemicals include heavy metals and petrochemicals come from a variety of sources in the urban environment. Mercury enters the lake from the atmosphere. The Wisconsin DNR’s general fish consumption guidelines apply to most fish in Lake Wingra. Due to PCB concentrations, the DNR recommends that carp from Lake Wingra be consumed no more than once per month. 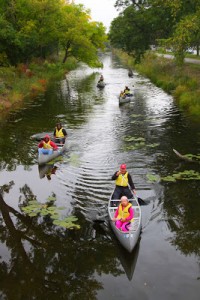 Can the lake be improved?

Though urban lakes have numerous management challenges, they can still be healthy ecosystems and provide high quality resources with the cooperation of many partners in the watershed community. A high density of people living within a watershed creates both challenges (e.g. stormwater and invasive species) and opportunities (citizen involvement) for watershed management.

In Madison, lakes are integral to the social and cultural fabric of our urban communities. There are many Madison residents who care about the condition of city lakes, including Lake Wingra. A group of such citizens, the Friends of Lake Wingra (FOLW), is working to promote a healthy Lake Wingra through an active watershed community.

FOLW has played a central part in bringing together partner organizations (e.g., neighborhood associations, interest groups, and government agencies) that have a role or interest in the management of Lake Wingra and its watershed. Collectively, Lake Wingra partners are working very hard to protect and restore Lake Wingra through individual projects as well as coordinated planning. There are lots of ways we, as individuals, can help to improve and maintain the health of Lake Wingra by making small changes in our actions and in our own backyards.

The boundaries of watersheds (and subwatersheds) are generally determined by surface topography, with water of course always flowing downhill. However, construction (e.g., dams, channels, buildings, streets, stormsewers) can change the flow of water, resulting in a change in the shape and size of watershed boundaries.

The original Lake Wingra watershed has been changed rather dramatically due to urbanization, largely a result of dredging and filling associated with the construction of Vilas Park, Wingra Creek, and Arboretum Drive. Prior to the dredging of what is now Wingra Creek, Lake Wingra probably drained to Lake Monona through a meandering wetland flowage. The original boundary between the watersheds of these two lakes was probably not precise, since the elevation change is very small and the direction of flow was probably subject to some change in response to varying local conditions. The USGS, using current topographic data, gives the eastern boundary at about where Wingra Creek flows under Beld Street.

As a result of the construction of the spillway (dam) at the current outlet of Lake Wingra (near the south end of Orchard Street) and of Arboretum Drive (that serves as a dike separating Gardner Marsh from the lake), much of the original Wingra watershed no longer flows into the lake itself but into Wingra Creek instead. If we see the shape of the original watershed as resembling a fish, the effect of these major hydrographic changes is to “cut off the nose of the fish.”

City “sewersheds” do not conform precisely to the natural watershed boundaries as defined by topography. Storm sewers carry water from buildings and streets in ways that can alter the original direction of water flow. Also, the City of Madison maps single parcels (properties) in only one sewershed, even if portions of that property are in adjacent sewershed. Thus, the city sewershed boundaries exhibit jagged edges which are to some extent artifacts of the pattern of individual parcel boundaries.

Who lives in the watershed?

The Wingra watershed is home to over 33,000 people in 14 different neighborhoods. The UW Arboretum, Vilas Zoo, Edgewood College, 6 parks, 2 golf courses, and numerous public schools, churches, and community centers also call the Wingra Watershed home. Because of protected natural areas like the UW Arboretum, the Wingra Watershed is home to diverse ecological communities. Forests, prairies, and several kinds of wetlands support a high diversity of plants including some rare species like the small white lady slipper and the prairie fringed orchid. The watershed is also home to numerous species of mammals, reptiles, amphibians, insects, birds, and fishes.

While the watershed is home for many native plants and animals, invasive species have degraded the native biodiversity of ecological communities and alter water quality in lakes like Lake Wingra. Urban landscapes are stressful environments for plants and animals, and invasive species are often better than native species at surviving and multiplying in these harsh urban environments. Invasives plant species can crowd out native plants by competing for resources such as light and nutrients. Invasive animals can alter native communities by feeding on native vegetation or animals. Invasives species may also cause declines in water quality in lakes. For example, Eurasian milfoil, an aquatic weed that is abundant in Lake Wingra, contribute to algal blooms in lakes by transferring nutrients from lake bottom sediments to the water. Carp, an exotic fish that is common in Lake Wingra, reduce water clarity by stirring up lake bottom sediments.

Lake Wingra has an altered watershed because of its urban setting. Urban watersheds differ from natural watersheds because much of the landscape is built by humans. In the Wingra Watershed, about half of the land use is residential neighborhoods and about 15% is commercial uses. Instead of native prairie, forest and wetland vegetation, most of the watershed is covered by elements of a “built environment”: roads, parking lots, buildings, and lawns. Many of these surfaces are impervious, meaning they do not allow rain water to infiltrate into the ground.

Impervious surfaces alter how water flows through a watershed and affect both water quantity and quality. When it rains on streets, parking lots, and lawns, runoff from these surfaces carries pollutants including dirt, oil, road salt, pesticides, fertilizers, and trash. Runoff becomes stormwater as it flows into gutters and storm sewers and eventually into Lake Wingra.