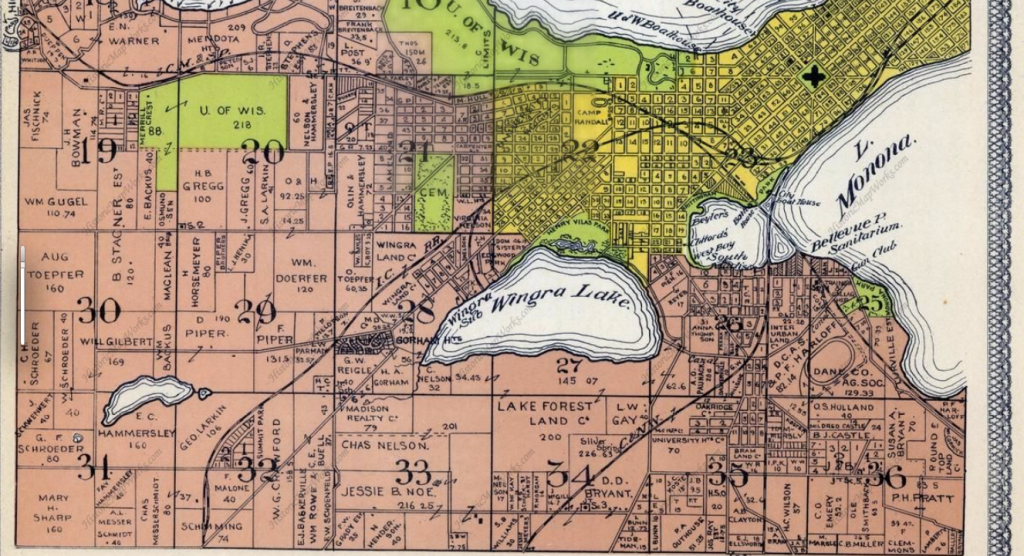 Odana Pond, the other natural lake in the Lake Wingra Watershed, is one of a number of glacial kettle ponds on the west sides of Madison and Middleton formed by buried ice chunks in the last glacial period 10,000 years ago.  Similar to Stricker’s, Tiedeman’s, Esser’s and others of these kettle ponds, Odana Pond is shallow (four to five feet deep) and has no natural outlet.  As a result water naturally levels varied

from year to year.  Unlike many of the other kettle ponds, until recently Odana Pond did not have an official name and has been called many different names, such as Bacchus Pond or Hammersley Marsh, or more correctly, the pond partially on the Bacchus property in 1911 or the marsh on Hammersley’s farm at the same time.  Odana Pond is located in the Odana Hills Park west of the Odana Hills Golf Course and most of the pond’s 14 acres are north of the Beltline highway.  This article is the first in a series of articles covering the history of the pond, the water quality issues of the pond and the current status of the MGE water withdrawal from the pond.

During the 10,000 year life of Odana Pond the size of the pond varied greatly.  During wet periods, such as 2,000 years ago, the pond was likely much larger and encompassed an area the extended south and west, including the Vitense Golf Land property.  It also extended east into what is presently the golf course.  When the pond’s basin filled, water likely flowed north along the present location of Dearholt Road to the present location of Segoe Road and eventually to Lake Mendota.  During dry periods the pond would likely shrink or dry entirely.

Native Americans appeared to be frequent visitors to the pond as shown by the mounds and artifacts found along the hills and ridges north of the pond as described by Robert Birmingham in “Spirits of Earth: The Effigy Mound Landscape of Madison and the Four Lakes.”  During the Late Woodland Period, 750 to 1250 A.D., Tribal members built what Charles Brown in 1911 called the Big Cross Mound Group on a hillside south of Odana Road between Wedgewood Way and Dearholt Road.  The mound group consisted of eight linear mounds, with the longest being 425 feet.  Two of the mounds crossed, leading to the name.  The mounds may have been used as an agricultural calendar with clear lines of sight to the east, south and north.   Brown noted bird effigy mounds to the north and east of the Big Cross site.  Pottery from the Lake Woodland Period was found at the Dietz site to the west of Big Cross Mounds Group in the area of Coney Weston Place or Fairway Drive.

Periodic high water levels inhibited farming the land to the north of the pond.   A ditch was dug to drain some of the water to the east.  Once the golf course was constructed in the mid-1950s, a permanent solution to the high water level was constructed.  A pipe was laid from the small pond in the golf course under a hill and outletting to a drainage ditch along the railroad tracks.  Today, that railroad bed hosts the South West Bike Path.  The drainage ditch, in turn, drains to a storm sewer flowing down hill to Nakoma Road and to Lake Wingra.

The physical linking of Odana Pond and its watershed to Lake Wingra has had a number of ramifications.  First, it increased the watershed area for Lake Wingra by about 38 percent.  Second, the connection became a conveyance of many pollutants, especially chlorides from road salt, to Lake Wingra.  This water quality role will be the focus of later articles in this brief series.