Monarchs for Kids in 2017—Connecting with Mexico 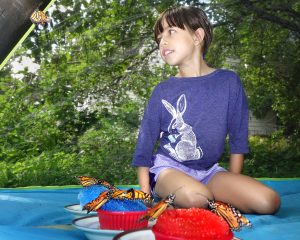 Feeding Monarchs in the Breeding Tent

In the library, a monarch butterfly rested on a small boy’s hand.  Suddenly it fluttered upward—zig-zagging over bookshelves toward a window. Four squealing children ran to where it landed on a windowsill.  Catalina approached, coaxing it onto her fingertip.  Her eyes flashed with uncertainty, bravery, and wonder.  A big smile appeared.  “Look what I caught!  Does she want to go to Mexico?”

All around Madison last summer, children were getting to know monarchs up close, thanks to the Friends of Lake Wingra.  “Butterflies at the Library” every week was one of our many summer events and workshops.  We gave monarch eggs to more than 50 families.

In September, we distributed monarch eggs to elementary schools in four school districts: 118 classrooms received about 10 monarchs each. When bright orange butterflies emerged in October, the children went outdoors to release them to the sky.  “Adios!” they would say. “You have to speak Spanish from now on!”

Monarchs bridge the boundaries between three countries during their extraordinary migration.  Two years ago, when I went to see the monarchs wintering in Mexico, I visited two elementary schools near the butterfly reserves to set up exchanges with Madison schools. Working with bilingual schools here in Madison—Midvale and Lincoln—eliminates the language barrier and provides an opportunity for children in both countries to understand common interests and connections.  Saving monarchs requires action in both countries. 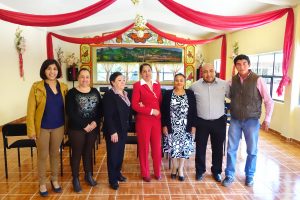 When I visited the wintering butterflies again last March, two Midvale classes sent video files for me to deliver to their Mexican counterparts, while three Mexican schools returned the favor.  On both sides of the border, teachers and students introduced themselves: “What games do you like to play?  Do you have horses and goats, chickens and turkeys at your house?  My family grows avocados.”

And this year, helping monarchs is more crucial than ever. In March of 2016, a devastating blizzard felled thousands of trees in the Mexican forest where monarchs spend the winter, freezing 7.4 % of the population.  Before 2016, our program depended on a time-consuming hunt for eggs in the wild.  After the storm, eggs here became even harder to find. So to continue despite this setback, I learned how to breed monarchs.  This advance has allowed us to supply monarchs to even more schools than we originally imagined! The exchanges will provide motivation for everyone, while expanding the discussion about how to save the magnificent migration. It feels hopeful when everyone’s working towards the same goal, despite the miles and borders between.

For 2017, our goals remain the same.  If kids get to know monarchs up close, they will want to help save them.  Monarchs bring people together.  If neighborhoods are healthy for monarchs, the city is healthy for people.  Now that our methods have been tested, we need to find more volunteers to sustain the program.  We need volunteers to breed monarchs, bring milkweed food to schools, show monarchs during summer events, raise monarchs at home with kids, and plant milkweed.  Pick a role and climb aboard! Please contact our program manager, Casey at volunteer@lakewingra.org if you are interested in volunteering.