Forecast
Two more days of sun before the next snow.  Use that time to clear all packed snow.  In the morning, scrape or brush any snow left on the sidewalk–it takes just a few minutes.  Even if you can’t get it all, the sun on Wed and Thurs should evaporate the rest (if it’s thin enough).
When you remove most of the remaining snow, the sun evaporates any ice stuck tight.  You’ll have a clean sidewalk when the next snow comes, preventing ice buildup.
Fri and Sat will bring two days of snow.  When the snow starts, shovel a narrow lane along your sidewalk–and touch it up repeatedly.  This channels people along one area, keeping them from packing the snow everywhere as snow accumulates.  When the snow is done, scrape this lane mostly clean of packed snow.  Over the next few days, you can widen the lane till the whole sidewalk is clean.
Starting Sunday, we’ll have three days of sun, but it will be VERY cold.  Over those days, if your sidewalk is mostly clear, the sun will evaporate the remaining packed spots– despite low temperatures.  Note–it will be far TOO COLD FOR SALT TO WORK.  It’s lower limit is about 15F. 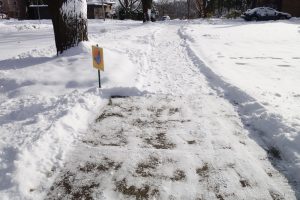 Right after the snowfall ended, I shoveled the sidewalk (up to the sign).  A thin layer of snow remained, especially where it was packed.  Then there was a thin dusting of snow, which I didn’t remove. 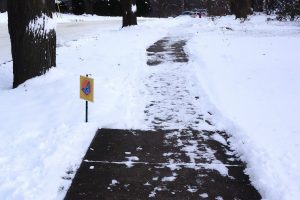 Then we had one and a half days of sun.  My sidewalk gets only a few hours of sun a day.  In the rear, you can see where my neighbor scattered salt.  My sidewalk, without salt, is as clear as his, even though he gets more sunlight.
Comparing the two photos, you can see that the sun evaporated a lot of packed snow, even though it was quite cold.
Note the part in the middle, just behind the sign.  Here I left about half an inch of snow that accumulated overnight, at the end of the snowfall.  This was too much snow to leave.  It reflected the sunlight… so snow did not evaporate.  It shows that you need to “touch up” at the end of a snowfall if you shoveled during the snowfall.