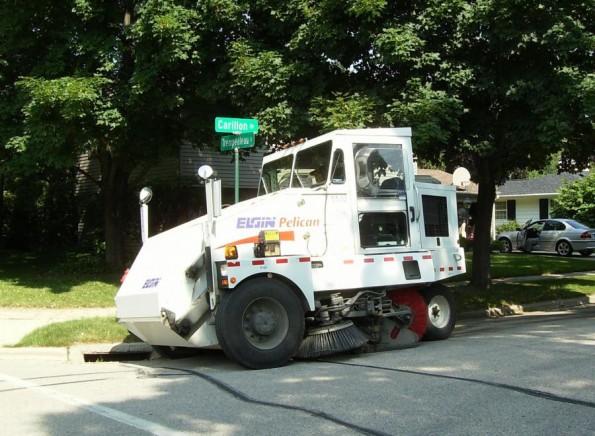 FOLW volunteers met with Roger Goodwin, Director of the City of Madison Streets Department, twice to discuss the possibility of extending the City’s intensive street sweeping program to one or more neighborhoods in the Wingra Watershed (specifically the Vilas and Dudgeon-Monroe neighborhoods). The goal of the intensive street sweeping is to improve Lake Wingra’s water quality by removing more debris from the gutters, thus preventing the debris from entering the storm sewers and lake.

The City has been more frequently sweeping the streets in a few neighborhoods on the east side of Madison since approximately 1996. Typically, a non-commercial street is swept about once a month during the period May-November. In a neighborhood that is participating in the intensive street sweeping program, the streets are swept during this period once a week. Posted parking restrictions facilitate this intensive sweeping. The City has found that there is more compliance in neighborhoods where a lot of families live.

There have not been any studies completed on the impact of the intensive street sweeping on the quality of the lakes in the east side neighborhoods. However, the City is conducting a study of the effectiveness of street sweeping on water quality in three areas on the west side of Madison near Hammersley Road. This three-year study will end in late 2004. They are comparing the effectiveness of vacuum versus brush sweepers and are measuring and comparing the amount of pollutants (e.g., phosphorus, heavy metals) that enter the lake in the areas that receive intensive sweeping area versus those that receive no sweeping.

The FOLW volunteers discussed with Roger Goodwin how it would be determined that a street or neighborhood is suitable for intensive street sweeping. The following are some of the criteria: