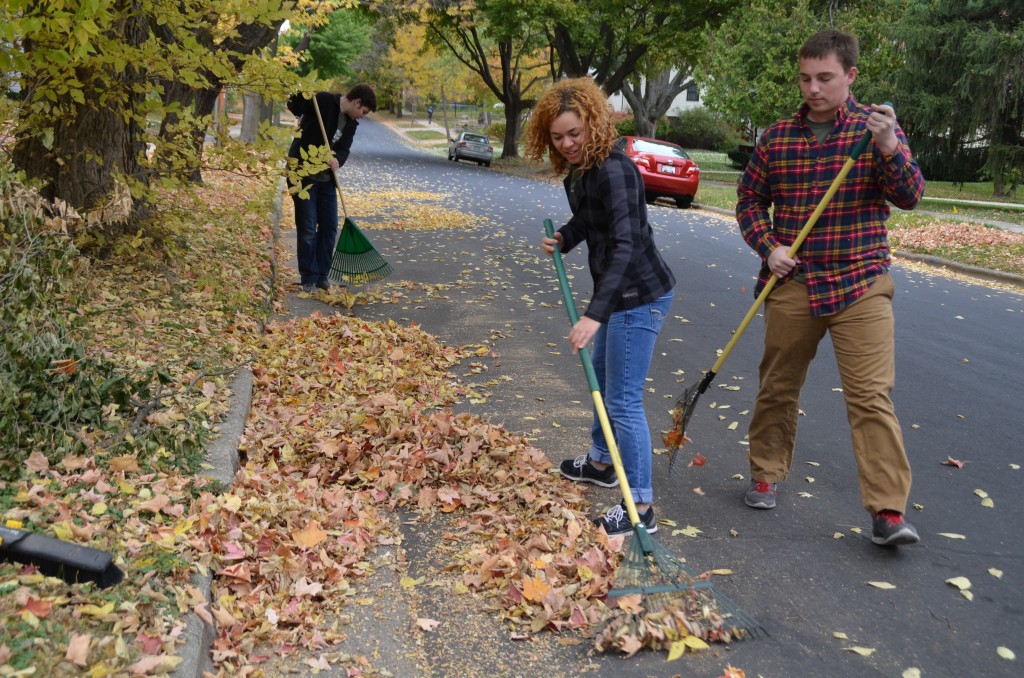 This fall, Friends of Lake Wingra has been working together with City of Madison Engineering on the second year of a leaf management pilot project in the Lake Wingra watershed. Proper leaf management is a priority because wet, decaying leaves in the street release a nutrient “tea” that contributes to algae blooms and nuisance vegetation growth in our lakes. Last year, residents in a small 3 block area off of Tokay Boulevard were encouraged to pile their leaves neatly on their terraces for collection, making sure to keep the street area clear of leaves. Initial results with last year’s project were positive with many people participating in raking their leaves out of the street. This year, residents of the same neighborhood were asked to go a step farther and collect their leaves in yard waste bags and then place the bags on their terrace for collection. Project partners theorized that collecting the leaves in bags would help to contain the leaves on the terrace and prevent them from ending up in the street.

The effort has been led by Friends of Lake Wingra board member Roger Bannerman, along with Phil Gaebler and Greg Fries of the City of Madison Engineering department. The public portion of the project began with an informational meeting and a mailing to everyone in the project area explaining the process that would be used. Volunteers then went door to door throughout the project area further clarifying the process, handing out bags, and asking residents to participate. Monitoring has been taking place periodically throughout the fall to gauge participation levels and to measure the amount of leaves remaining in the street.

Overall the residents have been positive about the project and willing to participate. Everyone in the pilot area was given 20 free yard waste bags while people in the control area were asked to purchase their own bags.   Those in the pilot area could request additional bags as needed. As of November 11, one resident had used over 75 bags! People have reported that they feel good about being able to help and do their part to improve the health of Lake Wingra. The streets in the pilot area have been relatively clear of leaves and the collection process has not had any challenges caused by using the bags.

There is a second project going on in the Lake Wingra watershed with the objective of keeping the streets in the pilot area completely free of leaves. The City has been collecting the leaves weekly in this small area and making sure the streets are clear before a storm. Water samples are being collected from stormwater outfalls that are connected to these streets and are currently being compared to stormwater outfalls connected to a control area with typical leaf accumulation. The data isn’t back yet but we are hopeful that streets that are clear of leaves will result in water that is clear of phosphorus. Check back next issue for an update on the results of both of these studies!